Had a really good meal Friday night in Lastingham, finishing off with a huge Raspberry Pavlova. 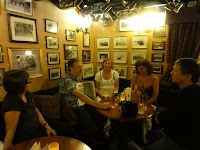 In the bar later Alec and Donald played their squeezeboxes and we sang a few songs.

Bedtime was livened up by discovering our bathroom had water on the floor which had leaked into the dining room downstairs. Couldn't find the source so went to bed, only to discover it was the saniflow system when I flushed the loo and water (clean!) poured everywhere again. Landlord was on phone to a plumber at half past midnight who agreed to come the next day, but until then we couldn't use the bathroom, and had to go into the pub in the middle of the night to use the facilities! Quite spooky, and really surprised their two pedigree Persian cats who are obviously used to having the pub to themselves in the night.

Next day, Saturday, drove to Whitby. I love the drive from Pickering over the moors which are purple with heather at this time of year, and we always get excited when we come over the hill and get a view of Whitby in the distance, especially the Abbey and the Metropole. 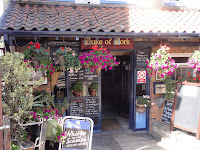 After shopping we had our traditional crab sandwich lunch in the Duke of York. Love Whitby crab.

Then watched some dancing - including Snark rapper up with two sets and performing rapper in stereo: 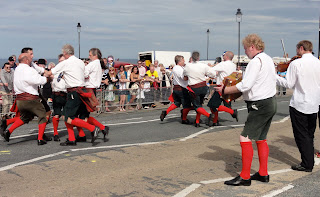 The we walked up to the Elsinore and watched the opening parade of all the dance teams - about 15 teams in total, and the pictures are of Snark Rapper, Silkstone Green, Gog Magog Molly and Gaorsach Rapper: 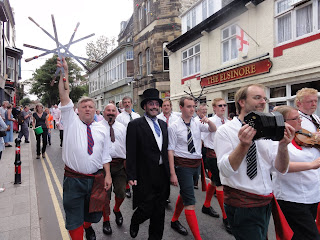 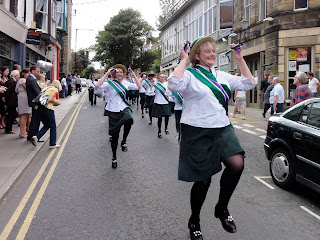 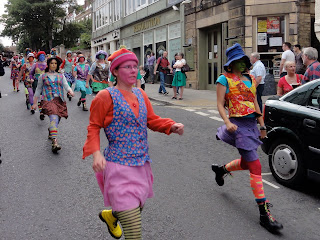 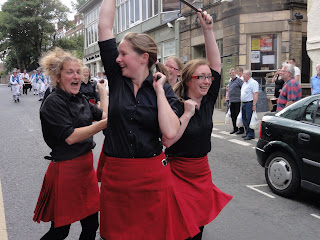 Tea was more traditional fair of fish and chips, and unusually for Whitby it was warm enough to eat in the garden. Then we dashed to the Pavilion Theatre to see Sid Kipper (aka Chris Sugden), a spoof Norfolk singer and storyteller. Usually he's hilarious, but I didn't thin

k he was on his normal good form. He obviously had a bad cold which affected his performance, and was quite difficult to follow. Songs were still funny though. Then into the spa for the first dance of the festival. Martin Harvey on good calling form as usual, and the band, Heckety, were excellent. Well of course they should be, coming from Sheffield.

Walked home Andrea's way through the Whalebones - there are so many different ways back to our cottage we have to take it turns to chose. Quick nightcap, and in bed for 0140, quite early for Whitby!

Hopefully the weather will say good, the light on the way to the concert was wonderful. 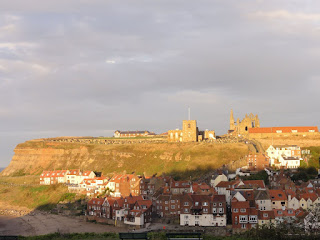 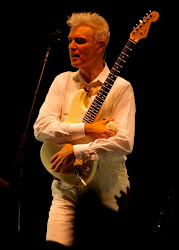